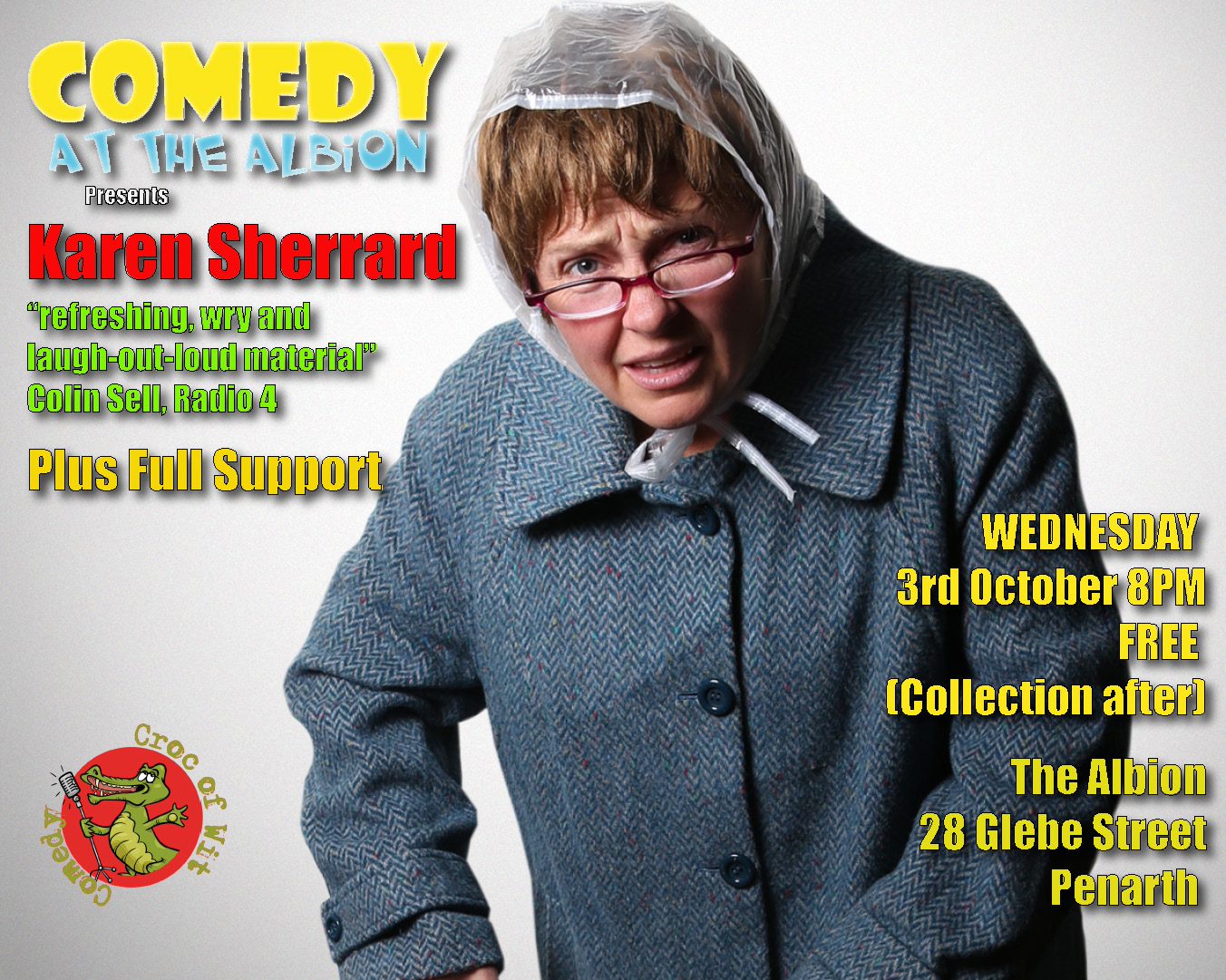 Just when you thought summer was over, we take you to the Village Fete of the peaceful Rhondda community of Llanfairchwaraesboncen. Your host is seventy six year old Eirys Evans, Queen of the Tombola. You are all entered in the raffle. Eirys promises the event will be “A Fete Worse Than Death”.

Eirys is played by this month’s headliner KAREN SHERRARD, whose impish one liners and commanding audience interaction both surprise and delight. She has been described by Radio 4’s Colin Sell as “Warm, witty and winsome, with always the unexpected twist in the outcome and the constant readjustment of a view on the world. You want to bottle Sherrard and take her home.”

Karen has been touring her show around the UK, and has completed a successful run at the Edinburgh Fringe.

Top quality support is provided by Butetown’s Finest LEROY BRITO,. Actually he lives in Penarth, just two streets away from the gig.

Since his debut in 2011, Cardiff based comedian Leroy Brito has developed a reputation as one of the rising stars of Welsh Comedy.

A regular on the comedy circuit throughout the UK, in 2016 Leroy had a successful stint performing across the Atlantic in New York City. This was quickly followed with further success at the Edinburgh Fringe 2017. Back home in Cardiff he’s had sold out solo shows at the Wales Millennium Centre (Ffresh) and Cardiff Glee, the latter being broadcast on Made In Cardiff Television.

Leroy joins us as he warms up for his new show at the Cardiff Millenium Centre, “Three Dads”, in November.

Not yet twenty years old, CALUM STEWART has been called “An exciting new comic with an armoury of killer jokes. His is a name to remember” by none other than Joe Lycett, and “A national treasure in the making” by Scott Capurro, Calum uses his youth and Asperger’s to present a unique comic vision to the world. Definitely one to watch.

Our Newcomer this month is the talented LIAM HOWELLS. Liam learned his craft with our August headliner Ignacio Lopez, and we were very impressed by his debut performance at The Glee Club in Cardiff.

All held together by your MC for the evening, RUTH HINE. Ruth hails from Liverpool, and has years of experience on the London and national circuits. An adopted Penarth resident, Ruth’s material has been described as “Hilarious … Next Year’s Perrier Winner’s Material” by the Edinburgh Guide.

And just how much does this carnival of comedy cost? Well, if you’ve enjoyed it, and can afford it, we pass the hat at the end of the show. You won’t get a better comedy offering in Penarth this month.