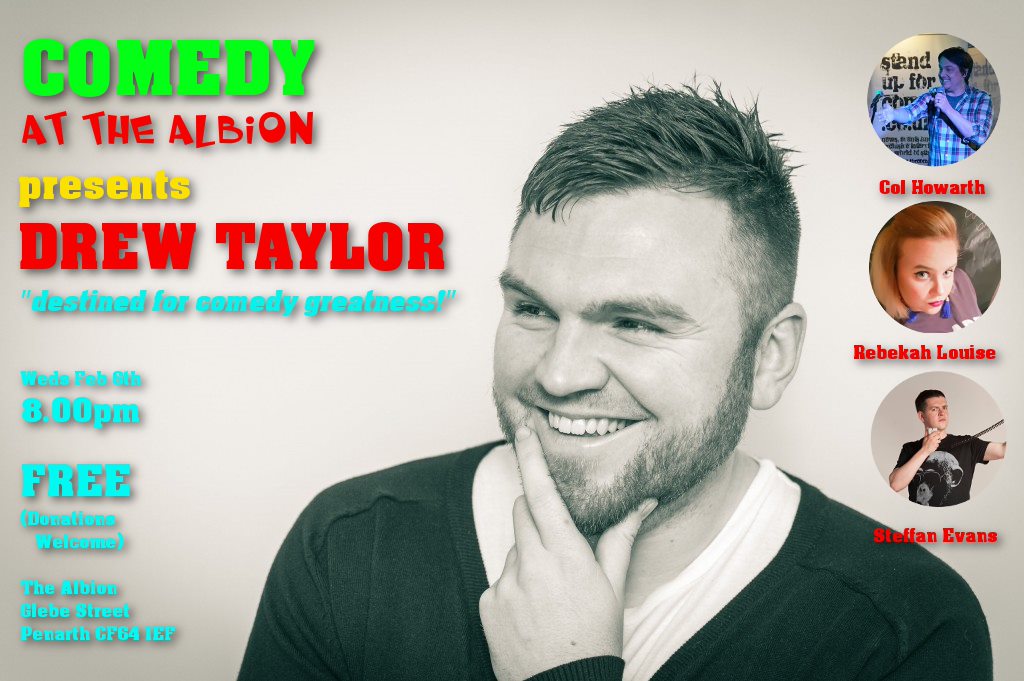 Ah February. The month of leap years, Valentine’s Day and massacres. Well February is now Fun-u-ary! Here at the Albion we have a cohort of highly skilled funsters to melt away your winter blues.

Headlining our show is DREW TAYLOR. Sharp observational comedy at its best, Drew performs at some of the biggest clubs in the UK, such as The Glee Club and Hot Water. Often heard on on Radio Wales, as well as writing for BBC Sesh, Drew is a massive part of the South Wales comedy scene. He’s performing here as a warm up for his new show at the Leicester Comedy Festival: “The Taming of the Drew”.

COL HOWARTH opens the show. Highly experienced, engaging and warm, “Energetic, clever and fun, with perfect comic timing” (Wing It Comedy) Col’s infectious personality lights up the room. Col will always leave you with a smile on your lips and slightly damp pants from laughter. Col is a highly sought-after MC who never fails to get the crowd going. He recently supported DREW TAYLOR’s on his last tour, and is a festival veteran with his own shows.

In the middle we have a returning headliner. STEFFAN EVANS headlined the first Comedy at the Albion back in July, where he proved an instant hit. Steffan writes and stars in many BBC Sesh videos, and has appeared on S4C’s ‘Gwerthu Allan’ . He has also guest hosted on the Rhod Gilbert Show. Steffan takes a middle spot to try some new material. ‘A roaring boy if there ever was’ (Chortle)

Not to be missed is Rebekah Louise – an honest, self depreciating comedian swiftly rising up the ranks of the circuit.

Your host for the evening is RUTH HINE. Ruth hails from Liverpool, and has years of experience on the London and national circuits. An adopted Penarthian, Ruth’s material has been described as “Hilarious … Next Year’s Perrier Winner’s Material” by the Edinburgh Guide.

And just how much does this carnival of comedy cost? Well, if you’ve enjoyed it, and can afford it, we pass the hat at the end of the show.

So come to the Albion for a rollicking great lump of comedy. It’s grin, up ‘Narth!