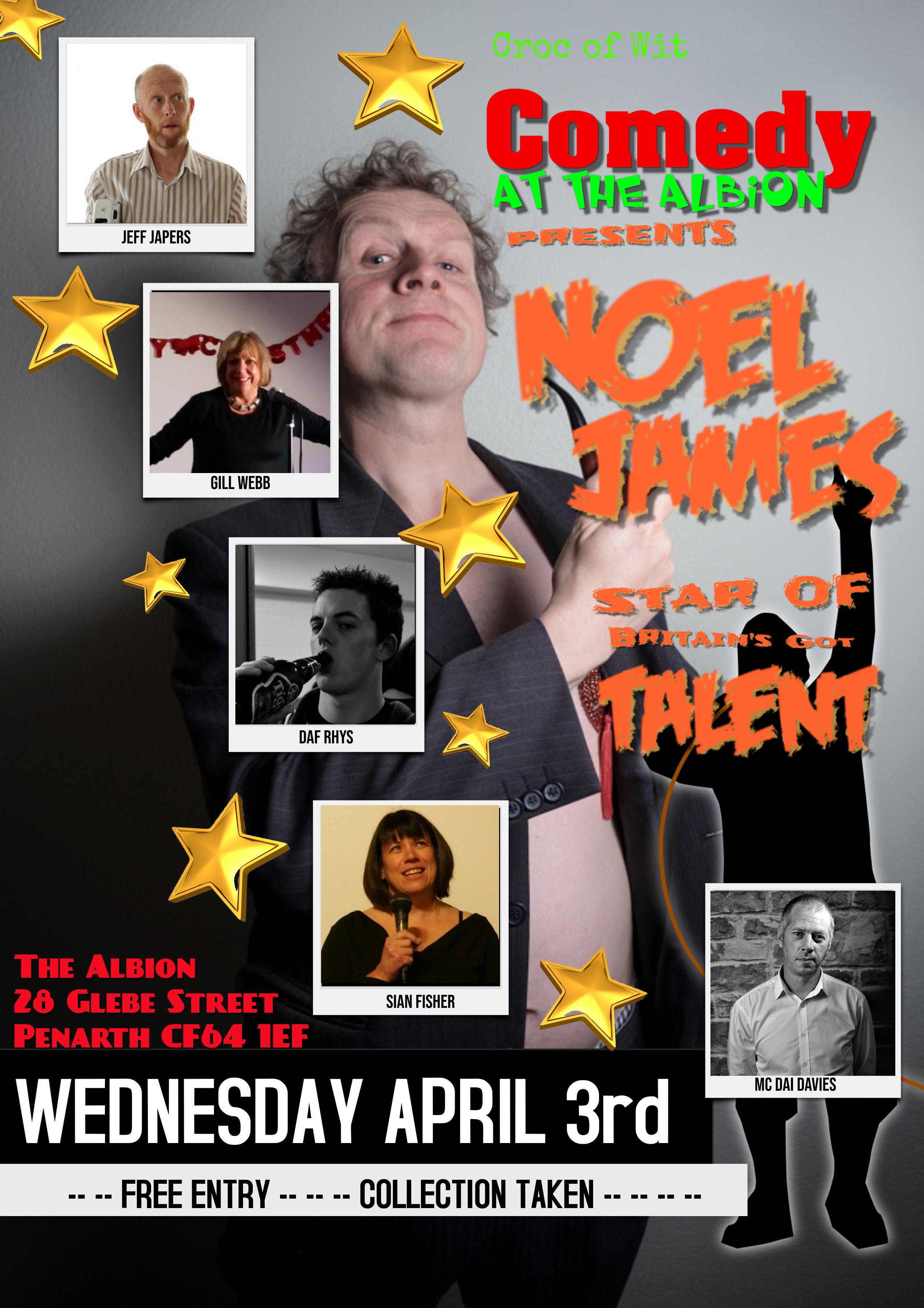 Yes that’s right, him off the telly!

NOEL JAMES recently became an overnight sensation after twenty five years as a professional comedian when he reached the semi final of ITV’s Britain’s Got Talent. Anyone who knows comedy will know that his “apprenticeship” involved headlining most comedy clubs in the UK, including the Glee, Frog and Bucket. Banana Cabaret, Hyena, The Stand, Up The Creek, Baby Blue, and more. He has worked all over the world in places like Dubai, Shanghai, Berlin, Cape Town and Canada.
He has appeared on numerous tv programmes, and written for many more.

James’ wordplay id second to none. He comes alive on stage and always succeeds in his one aim, which is to cheer everybody up.

“The funniest joke I’ve ever heard – Almost certainly it was by Noel James. Go and see him live to hear it.” – Jon Richardson, The Guardian 2017

“Any stand-up can struggle to connect with an audience. But James betrays the soul of a poet and accomplishes it with such rare panache and commitment that it approaches art.” – Jay Richardson, March 2010

JEFF JAPERS is known for his hilarious comedy songs accompanied by a foot triggered slideshow and a stuffed sheep resulting in an entertaining performance of inoffensive daftness. His show really is a must-see. And afterwards it can’t be unseen. An adopted son of Pontypridd, Jeff has been described as “a musical comedy genius/idiot” by Neath Comedy Festival.

“The audience loved the daftness of it” Chortle.

GILL WEBB is a newcomer to the scene, but her talent belies her short time on the circuit. Her warm, self deprecating style and razor sharp observations are winning her new friends wherever she performs. We know you’re going to love her.

The evening is held together by MC DAI DAVIES.

“A comedic version of the Super Furry Animals, a pleasure to watch” – David Owens, Wales online.

The show also features rising stars on the Welsh Comedy Circuit DAF RHYS and the naughty but lovely SIAN FISHER.

The night is FREE ADMISSION, but we take a collection after the show.